This term we have been finding out about life in ancient Rome. We have loved learning about Roman inventions and artwork, as well as looking at all those gory and gruesome Gladiator fights at the Roman Arena.

Take a peek at our own Roman Arena constructions below using large and small scale construction equipment.

We have been exploring Roman Mosaics and creating some of our own. Each week we have thought about different mosaic techniques and the important rules to remember when creating mosaics.

All Around the World

We have started our new topic this term and have begun our jet packed adventure by visiting the UK, Australia and China.

We enjoyed sharing our learning around our topic this term with the whole school and our grown-ups. Well done Oak Class...a super assembly!

We discovered famous landmarks around the UK for our topic launch, carefully drawing places such as the London Eye, Stone Henge and the Angel of the North.

As well as  following instructions to build some key landmarks out of our building bricks. Take a look at our Stone Henge and Blackpool Tower models!
Our Year 1 Children helped us to identify the four countries that make up the United Kingdom. Successfully sorting out their place on the map, symbol and flag.

Next we jetted off to our next destination...Australia. Here we learnt about the different territories and cities as well as all the strange and somewhat dangerous animals that live here.

We built our own Sydney Opera House, working as a team to create each part and carry all the building blocks needed.

And of course held our own musical performance! 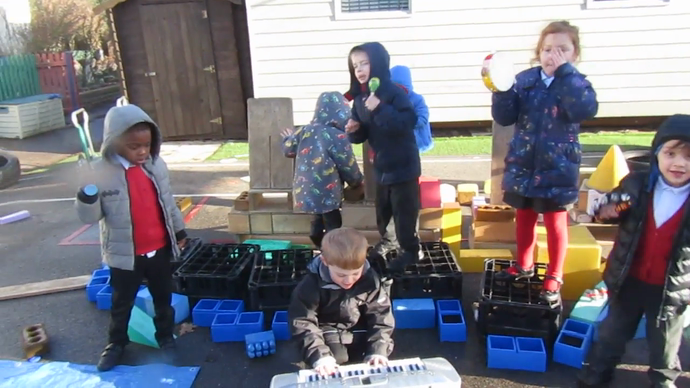 Our next stop took us to China just in time to celebrate Chinese New Year and the year of the pig. We made sure our classroom was ready with beautifully decorated lanterns and enjoyed taking part in many different Chinese traditions.

Baking Year of the Pig biscuits

Hanging our wishes for the New Year in our school woodland We really enjoyed our pirate maths day this term. We helped Captain Sally Morgan solve some tricky maths problems as well as looking at pirate themed 2D and 3D shapes.

We were very surprised to find a strange crash site suddenly appear on our school field. We were not sure how or when it got there as it had not been seen earlier in the morning!

We were fabulous detectives and spent the rest of the morning discovering and investigating the crash landing scene.

We have even begun to build our own spaceship, lets hope we don't crash land on some alien planet!

We launched our topic with two fantastic space themed days. Working with our fellow astronauts in Willow Class we explored different space activities including making our own Paper Mache solar system and constructing large rockets to take us to the moon!

Have a peek at our photos below...